By Jennie Rees
Special for NKyTribune

Depending on what you consider the record for winning Turfway Park’s signature race, trainer Mike Maker can either score his own mark or tie for the most wins with Stolen Base in the 600,000 Jeff Ruby Steaks $, 3rd grade, Saturday.

One thing is certain: No trainer has dominated Kentucky Derby prep like Maker, who won the 1 1/8 mile stakes six times between 2006 and 2020, including four of the last six races. But technically, the overall winning record belongs to the late William E. “Smiley” Adams, who won the race that began as the Spiral Stakes seven times in a row over four years, 1977-1980, with the stakes divided into two divisions three times. during this duration. The Spiral was created in 1976 by John Battaglia, general manager of the track then known as Latonia and the father of longtime announcer Mike Battaglia, who left the stand in 2016 after 43 years but continues to do the morning line.

Maker holds the most wins with stakes having graduated status as well as different names: he has won the Jeff Ruby and the Lane’s End twice each and the Jack Cincinnati Casino Spiral and the Horseshoe Casino Cincinnati Spiral once each.

“The name doesn’t really matter to me,” Maker said. “I’m lucky to have the success we’ve had in this race, and hopefully we can still build on that.”

The stolen base is not far away. He is the second 7-2 pick behind 2-1 favorite Tiz the Bomb in a field of 12 three-year-olds. With Blackadder’s Friday morning scratch due to his No. 12 position, Swing Shift is back in the running. WinStar Farm CEO Elliott Walden has confirmed that Swing Shift will work.

Tiz the Bomb has beaten Stolen Base in all three of their encounters, including a neckline against Turfway’s $125,000 John Battaglia a month ago. Tiz the Bomb was fanned, but the trip inside Stolen Base saw it in traffic in the stretch. Stolen Base was second at the end of the race at three quarter length behind Tiz the Bomb in Keeneland’s Castle & Key Bourbon (G2).

Stolen Base has almost always been on the hunt, except for a beating while sprinting over dirt in a Saratoga stake on his second start. But he awaits a signature winner, possessing only a first victory in Saratoga, as well as three seconds and a third in seven starts.

“In Houston, he got away badly, took a big trip, came too late,” he said. “Battaglia, arrived too late. Keeneland, really wide trip, too late. But I can’t wait to run a mile and an eighth longer than anything.

Maker also hopes running Stolen Base in blinders for the first time will give the colt more speed, helping him stay out of so much traffic. He likes what he’s seen of the colt Bodemeister training with the blinkers on, including an energetic canter Friday on Turfway’s Tapeta surface.

“He’s always been a laid-back horse, a horse anyone can ride,” Maker said. “I hate to make excuses, but he didn’t have the greatest trip to Keeneland. Didn’t have the best trip here in the Battaglia. I just started training him in blinders and he does a little more. I’m looking to get him a little closer to the beat, even if the distance increases, so he should naturally be closer, anyway. 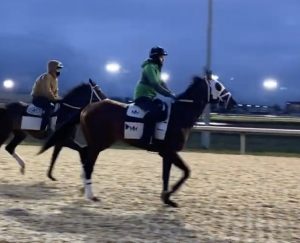 Stolen Base training at Turfway Park on Friday, April 1.

While the meet’s leading jockey, Gerardo Corrales, wasn’t cleared until late in the Battaglia, Maker said he thinks the real difference came “at the top of the lane when Corrales had to stabilize just a touch. Did that make the horse a little hesitant to get through that narrow hole, who knows? Either way, put on the turn signals and see what happens.

“Obviously he finished second in the Breeders’ Cup and came back on top in the Battaglia,” he said. “Hard horse…. It’s a very competitive field, as we’ve seen all winter. When they give that kind of money, it’s never easy.

Still, Maker says he hadn’t thought about being the winningest coach in the stakes or not.

“Other than about 30 minutes ago when you were talking about it, it never really crossed my mind,” he said.

“You’ll have to ask me on Saturday,” Maker said, adding the same for owners.

“We’ve been in the Derby and we’ve been beaten a bit,” he said. “We have already done that. If we feel it doesn’t belong, we’ll direct it where it belongs.

But Maker came under D. Wayne Lukas (including as an assistant when Lukas won the 1995 Jim Beam Stakes – as it was then called – with filly Serena’s Song, whose next race was the Kentucky Derby ). Lukas leads another notable filly, Secret Oath, in the Arkansas Derby on Saturday. He likes to say he’s won more big races he didn’t belong to than when he “belonged”.

So what would the former Maker boss advise if Stolen Base won the Jeff Ruby? Would there even be a decision?

“I don’t know,” Maker said, adding happily, “Hopefully I’ll call him on Sunday to congratulate him, and then I can ask him.”