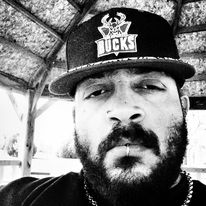 Drew Lines is preparing for a North American radio release with “15 Minutes of Fame” and the Borrowed Time tour with Trotter Water, Space Kase and Caesar Reddington

The world is full of cutthroats and crooks. It’s rare to find a genuine person who keeps their word and does what they say.”

GREEN BAY, WISCONSIN, USA, March 5, 2022 /EINPresswire.com/ — Andrew D. Wold (born December 27, 1984), known professionally as Drew Lines, is a hip-hop artist and songwriter American currently residing in Green Bay. Wisconsin, with his wife Quinn and their three children. Drew Lines became the first hip hop artist to be signed by Stryker Records, a label primarily known for releasing rock music. Although the most recent artist signed to Stryker Records, Drew is no stranger to the music scene or the writing process that accompanies it.

“Growing up was a struggle, an uphill battle, but every man’s struggle is his own, and I’ve been through what I hope is the worst of mine. There was a time when I wandered aimlessly, trying to find As an artist in this new musical game there are many obstacles and even more locked doors Finding the keys, just to find the right door, or doors, is its own obstacle.

What separates me from many others is that I won’t give up, give in when needed or just want to settle down. I’ve never been given anything in life, so breaking my ass to achieve this is second nature to me, but it’s not hard to get lost or lost, at least a bit of yourself.

Getting carried away with what the world wants, or whoever they want with all the parties, shows and tours. Even though this is all a great feeling and part of your success, you still find yourself sitting in the VIP or green room or near the merchandising tables wondering how far you will go.

It’s a tough road to travel and it will wear you down, like spreading a little butter on a piece of toast. The world is full of cutthroats and crooks. It’s rare to find a genuine person who keeps their word and does what they say and fits the grind. I wanted to quit 100 times more than I managed, but I never did.

One time Rick Ross, the real Rick Ross, said to me, ‘You can say you’re gonna do it, act like you will, but if you don’t 100% do it, you never really will. ‘ . It stuck with me for a long time. He also said to me, “If you don’t invest in yourself, the time, the grind, and the money, how on earth can you expect anyone, any real person, jump into your corner and invest in you.”

That was years ago and I still stick with it. It’s hard to believe in a person who doesn’t believe in themselves first. I’ve toured, I’ve met multi-millionaires, artists, business people, successful people, athletes, and at the end of the day, I’m still happy to be alive and to have that I have. This musical life is not for the weak or the quitters. You will fall and fail far more than you will win. If you are the type of human who can see that victory, struggle and great moments will far outweigh falls and failures and you will eventually find yourself where you want to be. Struggle breeds greatness…. Period! Take me as I am or hit some rocks. My life, my struggle, my trials and tribulations have shaped me. I’ve been through enough to know, everything finds a way, believe in yourself and work hard. Struggle breeds greatness. Remember, thanks to God, anything is possible.

In the summer of 2020, Drew Lines and Stryker Records signed a deal that would bring future recording efforts to Nashville by December. Drew Lines’ singles “Rise” and “Love is War” were recorded by multi-platinum producer, Malcolm Springer, at House of Blues Studio. Last fall, “Rise” topped the NACC (US & Canada) charts at No. 18 as well as the M3 Radio charts in Brooklyn, NY at No. 1 in the Hip Hop category and No. 1 in the top 30 “all genres”.
Now, Stryker Records is gearing up to release Drew Lines’ hip-hop remix of Saving Abel’s hard-hitting song, “15 Minutes of Fame,” on March 11. The song was again produced by Malcolm Springer with help from Scott Wilson of Saving Abel, at the House of Blues Studio in Nashville, and performances by Scotty Austin and Jason Null will be heard on the track.

Look for Drew Lines on “The Borrowed Time Tour” which kicks off March 10 at Wildfire in Gillett Wisconsin. Stryker Records artist Drew Lines will headline this tour and it will feature JPS Productions recording artist Trotter Water. The tour will also include Drew’s longtime friend and producer Scott Keller, who performs as Space Kase. The tour wouldn’t be complete without Caesar Reddington, nicknamed “King of the 715”, who you’ll find on Drew Lines’ upcoming single “Trunk Bangs”. The tour will have additional stops in Wisconsin and travel to Chicago, Kansas City and other markets across the country.

Drew Lines’ single “Rise” reaches No. 18 in the United States and Canada


EIN Presswire’s priority is source transparency. We don’t allow opaque clients and our editors try to be careful not to weed out false and misleading content. As a user, if you see something we missed, please bring it to our attention. Your help is welcome. EIN Presswire, Everyone’s Internet News Presswire™, attempts to define some of the boundaries that are reasonable in today’s world. Please see our editorial guidelines for more information.