At 1:30 p.m. on April 28, inside McKinley Avenue Elementary School in Stafford Township, hundreds of youngsters and their teachers crowded the halls near the school gymnasium, awaiting the signal from the Acting Director Hope Scherlin to ambush.

Inside the gymnasium, Susan Malmstrom was finishing another of the tens of thousands of classes she had taught over three decades of teaching.

A fun kind of chaos was about to ensue, and only one person in the building didn’t know it.

“Tomorrow is my last day, so I thought something might happen tomorrow,” Malmstrom said, shortly after McKinley students and staff headed into the gymnasium for a final mass rally with their favorite gym teacher – to dispatch Malmstrom with a huge, three-song dance party complete with colorful signs and handmade cards. “I had no idea this was going to happen today.”

When the doors were opened to allow students inside the gymnasium to return to their regular classrooms, they turned and joined the stream of others entering through the two doors. At first, Malmstrom was dumbfounded.

“I didn’t know what was going on,” she said, still gripped by the emotion of what an entire school had just achieved – her goal was not to cry in front of the students before walking out of the building to the last time. April 29, and she failed, for once. “But as soon as I saw the signs and heard the music, I knew something was wrong. 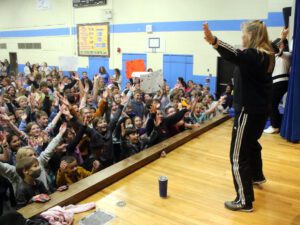 PLEASURE TO STAY: Before retiring from teaching, PE teacher Susan Malmstrom leads a final version of the ‘YMCA’ with students at McKinley Avenue School.

“A lot of teachers are not appreciated for what they do. And, of course, it’s hard to appreciate everything they do, but it was really nice. Incredible. They got me.”

While for only about 20 minutes the whole school celebrated Malmstrom with song and dance – “Celebration” and “YMCA” and “Cotton-Eyed Joe” were choice hits. Malmstrom received dozens of high-fives and hugs from students and several hand-delivered cards with messages of appreciation and gratitude. After the music and dancing stopped, Malmstrom gave the entire McKinley team a final message of encouragement.

“It’s hard to realize the impact you have when you see 600 children in a week for a short period of time each day,” she said. “As a teacher, you hope to have an impact. If I hit a child, that’s good. But my main message, and I just repeated it, has always been “Character is everything”. You can be the greatest athlete in the world, but without character it doesn’t matter.

At age 23 in 1987, Malmstrom arrived at McKinley after a short part-time stint in Bay Head, intending to establish herself as a physical education teacher who made no part-time effort.

“I didn’t want to be a physical education teacher who just threw a ball around and let the kids play,” she said. “I wanted to bring more to the game than that. I’m a creative person, so I like to do different things, and I challenged myself to think outside the box a bit, because with what I do, it’s not just about gym classes. It’s about many other aspects of life. I’ve always wanted to make sure I give my best as an educator.

Building her character, giving her best and being creative about it all came together in a school-wide project called “Make a Difference,” which Malmstrom has launched after seeing something in the newspaper about a similar initiative launched by The Asbury Park Press in the mid 1990s. 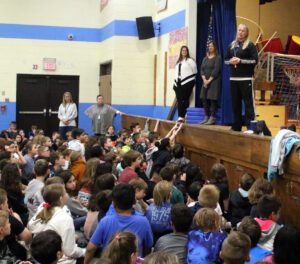 FINAL ADDRESS: Longtime physical education teacher Susan Malmstrom delivers a final message to her students during a brief retirement celebration in her honor on April 28.

“We did the very first one in 1995 for Ocean of Love, but then I had two pregnancies and we didn’t do it for several years,” Malmstrom said. “When I brought him back in 2000 he really took off and got bigger and stronger over the years. I never thought it would be one of the biggest things of the year, but we’ve always had great teams at this school and I’ve always had great partners to help me engage staff.

Each September, for Make a Difference week, students participate in a variety of activities to promote teamwork and caring for others, while participating in regular physical activity and effort. fundraiser for the charity of their choice that year. Beneficiaries include the Hunger Foundation of Southern Ocean, David’s Dream and Believe Cancer Foundation and Family Promise of Southern Ocean County.

In fact, for Malmstrom’s last “Make a Difference” hurray, Family Promise was the 2021 beneficiary. This year’s effort raised nearly $20,000, bringing the cumulative total to over $194,000. raised for charities over the past 21 years.

“I was going to retire three years ago, but I wasn’t going to go with remote learning during a pandemic,” she said. “I wanted that one more moment to bring everyone together for something big, and we killed it. It was the first activity we had done as a school since the pandemic began, and even though we did everything outside and had to keep the children 6 feet apart, it was turned out great. It was a huge amount of work, but when the end result is close to $20,000 for charity and the kids have this awesome sense of accomplishment, it’s amazing. 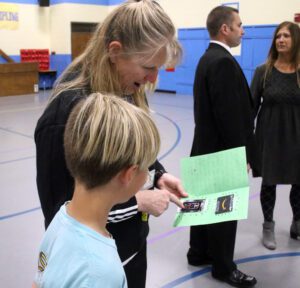 GOODBYE: Even as most students returned to class on April 28, several returned to the McKinley School gymnasium to give handmade cards to retired physical education teacher Susan Malmstrom.

And while Malmstrom has undoubtedly impacted many students over the past 35 years, McKinley alumnus and current teacher Sarah Dreher said her ability to lead an entire school was unique.

“As a student, I knew her to be very caring and fun, very involved in her work, with a lot of passion,” Dreher said as she led her students back to class after the ambush. “Now, as a colleague, I can see that she is definitely one of the heartbeats of the school. She brings us all together very well and always goes the extra mile to try to involve everyone for a greater cause.

Now, however, Malmstrom is ready for a more relaxed phase of life, with travel and anything else that appeals to her “total type A personality.”

“I’m just going to enjoy life. I don’t really have too many plans,” she said. “I will probably relax for a year and then look to immerse myself in some kind of charity work. I’ve worked a lot of hours for 35 years, so I’m going to take a break for a little while and then find things to do, something different.

Something different, but probably something that makes a difference.